Ever heard of Frontier Airlines?  No one has.  It sounds dangerous.  I was pretty confident on the plane with me would be an elk, a moose and maybe one other guy who somehow tricked himself into risking a flight on Frontier to save $50.

We all know airports are like a prison for foodies.  I was starving going into the flight and the only place that seemed like it would have edible food was this Gourmet PB&J Hut.

Question does this seven dollar PB&J look “gourmet” to you?

Could there be less filling in this sammie? Could the bread have been more clearly half frozen? Did the owners of this establishment ever have a mom who loved them? Probably not.  This sandwich was white trash.  I tossed it and decided my stomach could make it through the flight.

FAIL. I was effing starving about 10 minutes in and I… had….to…eat….

AIRPLANE FOOD!  Not just any airplane food but  FRONTIER airplane food.  I’m too traumatized to go over the details of this experience now but needless to say I will never be the same.

With an upcoming flight this weekend I was NOT going to let myself get in this situation again which is why I elected to make a shit ton of these Oatmeal Maple and Chocolate Chip Cookies.

The maple is subtle as shit which I was a little pissed about but overall these things are little GEMS.  Originally I was going to use a different recipe for these that included Whole Wheat Flour, Spelt, Tree Bark, Peace, Love, Pot stirred with an organic spoon while the CEO of Whole Foods blesses the cookies as they bake.  I went with  this recipe instead because I had everything on hand and they seemed like they would actually taste good.  Sorry I’m not sorry. 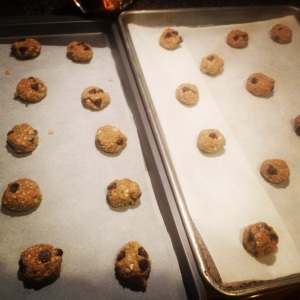 I know 9 minutes does not seem like a long enough cook time.  I can picture you taking them out, smooshing one until it looks like shit and then expertly claiming they are “not ready”. Well they are- so chill out for 2 minutes without eating one and they will set and be perfect. 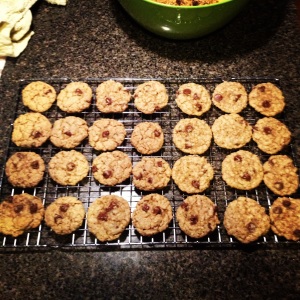 These are cute in their little size and make a great gifty.  For future reference, if you get on this site looking for a regs chocolate chip cookie recipe you won’t find it.  Turns out we’re not boring.