It was Kelsey’s birthday last week and after all the celebrating was over, I started thinking about getting older and all that goes along with it.

Rem chick nugs? You probably worshiped them as a shnub and now are at the tender age of 25 still jonesin for them.  Maybe you’re not jonesin because you still eat them.  It’s hard to say.

But you know I got you.  Chick nugs aren’t going away for a lifetime… they are just coming back in the form of socially acceptable adult food.  Chicken Paillards.  The good news is you get to the beat the crap out of the chicken (see my thoughts on this in our Wheat Bread post).  This should reduce some of the anxiety you have over abandoning chicken nuggets for better, tastier fare that actually has something to do with real, edible food.

So steps for Chicken Paillard Recipe:

Beat crap out of chicken

Bread chicken (Use panko bread crumbs or else)

Serve with salad on top 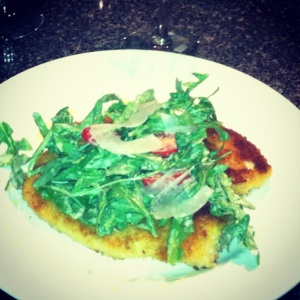 I know this is a big change.  I promise it will grow on you.  Don’t be mad.

*White Trash Option: Keep eating chick nugs- I know you can do it though…. Let go of the nugs….

So Kelsey and I went to a fundraiser at Capitale and decided to have some people over beforehand.  We did a basic cheese/hummus/snacks on snacks situation.

The real, star, however; was the lentil soup.  The now legendary lentil soup in our apartment.  We did not get to document the soup and if you keep reading you will find out why..

It started out as such a cute night… here we are all dressed up ready to eat lentil soup and dance at an open bar party til 2 am.

The soup was awesome.  I accidently over-lentiled the recipe and I’m not even pissed about it because it still tasted delicious.  It’s our little Buddha’s Recipe:

We had a bunch of people over and just kept it warm on the stove serving it in coffee mugs with parmesan and a drizzle of olive oil on top.  I knew the girls would destroy this soup but I was surprised that the bro’s we had over were so into it.  Our friend Ashley’s boyfriend played football in the NFL and he was even into our soup.  I mean I think that settles it: lentils are not just for hippies and DC food bloggers.

Anyway it was getting late.  We realized running out the door that we never took a pic of the soup but since I’d made enough to last a week we figured we’d take it later….little did we know.

The fundraiser (Celebration for Education) was a blast.  We danced true to form and it supported a good cause.  So far we were winning.

So how did the night end? Imagine Spiderman visited your kitchen but instead of attacking your apartment with spider webs it’s lentil soup.  Literally lentil soup everywhere.  Hand prints of lentil soup. By the looks of it none of the soup got eaten- it was strictly used to decorate our kitchen with brown sludge.  Most girls just order a pizza.  Clearly we are not most girls. 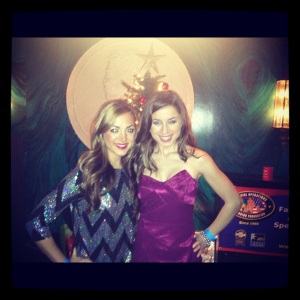