So I quit my job. The one I’ve had since college. The one I’ve moved cities for three times. Two weeks from now (my birthday) will be my last day. Whoa.
Let’s do the bad news first:
-I’m moving away from DC
-I’m going to miss Kelsey and my friends here
-I won’t be living at the Kastle
-I am going to be in tons of training in the near future that will keep me from cooking my face off for a little while 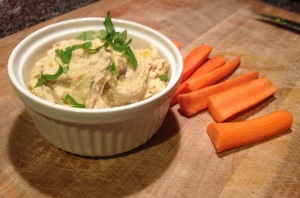 Yeah. I thought Lemon Risotto was therapeutic/calming to make. Then there was hummus… and it was good.

I know what you’re thinking… “oh so you shmushed some chickpeas and what not… what’s the big deal?”
Have you ever peeled a chickpea? Did you know you can? You can. It’s true. The “skin” around the chickpea gives hummus a grainy/watery texture. It is also a little bitter and the reason so many hummus’ are made with a ton of olive oil. When you peel these little suckers the hummus turns out THE MOST CREAMY EVER and you don’t even have to use olive oil (except for garnish if you just can’t imagine leaving it out).
Maybe this sounds batshit crazy to you. I adapted this recipe from SmittenKitchen and she claims that the whole peeling process took her nine minutes. I think it can be done in that time. But if you’ve just quit your job I would suggest taking a leisurely pace with a Barefoot Contessa show on in the background. It took me twenty minutes. Yeah I spent twenty minutes to ensure this hummus was like butter and to process everything I’d done that day. I’m not sorry about it. Tasted delicious.
So peel your 15 ounce can of chickpeas and reserve the liquid from the can. Basically you just pinch the chickpea between your thumb and pointer finger and the shell will pop right off. 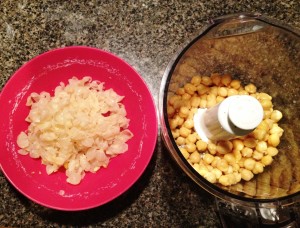 Also, if you buy cheap chickpeas they’ll practically already look like hummus in the can and you can’t peel these nugs when they’re mushy. Pulse them for 60 seconds in your processor until they are powdery. 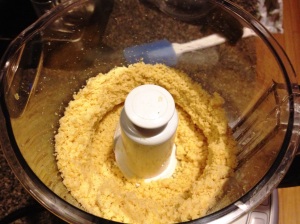 Add 2 tablespoons lemon juice, two cloves garlic and 0.5 cups tahini. Puree. Salt to taste. You are almost at the world’s best hummus stage. With the processor running drizzle in 0.25 cups of the liquid from the chickpea can. 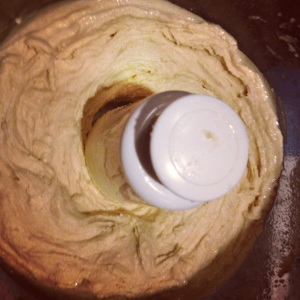 Okay game over. Amazing as is or with a drizzle of olive oil on top. I suggest letting this sit for as long as you can stand not eating it so the flavors can get going but I know that’s easier said than done. I’ll post my regs hummus recipe at some point for the days you don’t need a 30 minute chickpea peeling therapy but in the meantime think this one over. 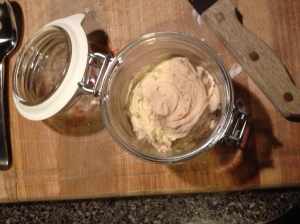 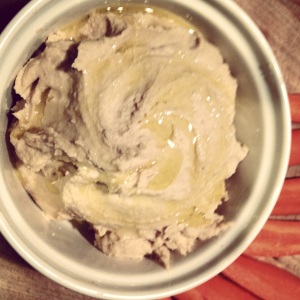